High standards and The Cycle of Coercive Parenting…

High standards and The Cycle of Coercive Parenting…

I saw this article linked to Facebook this morning…

New research at the University of Warwick into 50 years of motherhood manuals has revealed how despite their differences they have always issued advice as orders and set unattainably high standards for new mums and babies.

“Dr Davis found although the advice from these experts changed over the decades, the one thing that didn’t change was the way it was delivered. Whatever the message for mothers, it was given as an order with a threat of dire consequences if mother or child failed to behave as expected.”

“Dr Davis said: “Despite all the differences in advice advocated by these childcare ‘bibles’ over the years, it is interesting that they all have striking similarities in terms of how the experts presented their advice. Whatever the message, the advice was given in the form of an order and the authors highlighted extreme consequences if mothers did not follow the methods of childrearing that they advocated.”

“Levels of behaviour these childcare manuals set for mothers and babies are often unattainably high, meaning women could be left feeling like failures when these targets were not achieved. Therefore while women could find supportive messages within childcare literature, some also found the advice more troubling.”

This article was shared by a group on Facebook that is against “Baby Training” in the form of sleep training such as CIO (cry-it-out) or controlled crying. And I completely agree with them that part of the focus of the article is to show that so many parents are coerced into trying to achieve unattainable standards when it comes to children’s sleep that goes against what is biologically and physiologically normal. I could go on and on about why controlled crying is harmful including the changes in cortisol levels and the long term effects on stress but I think that a previous article by Dr. Gabor Maté sums it up perfectly…

People cannot consciously recall what they “learned” in the first year of life, because the brain structures that store narrative memory are not yet developed. But neuropsychological research has established that human beings have a far more powerful memory system imprinted in their nervous systems called intrinsic memory. Intrinsic memory encodes the emotional aspects of early experience, mostly in the prefrontal lobe of the brain. These emotional memories may last a lifetime. Without any recall of the events that originally encoded them, they serve as a template for how we perceive the world and how we react to later occurrences.

Is the world a friendly and nurturing place, or an indifferent or even hostile one? Can we trust other human beings to recognize, understand and honour our needs, or do we have to shut down emotionally to protect ourselves from feeling vulnerable? These are fundamental questions that we resolve largely with our implicit memory system rather than with our conscious minds. As psychologist and leading memory researcher Daniel Schacter has written, intrinsic memory is active “when people are influenced by past experience without any awareness that they are remembering.”

The implicit message an infant receives from having her cries ignored is that the world — as represented by her caregivers — is indifferent to her feelings. That is not at all what loving parents intend.

Unfortunately, it’s not parental intentions that a baby integrates into her world view, but how parents respond to her. This is why, if I could relive my life, I would do much of my parenting differently.

However, the baby training aspect was not exactly the first thing that came to mind when I find started reading the article.

The first thing that came to mind was how much it shows that the cycle of coercion is being perpetuated; from the authority of the book (or people giving advice), to the authority of the parent, to the focus on punishment and reward to keep control, to learning to make decisions because of external motivation and in doing so, continuing that cycle of control and coercion. 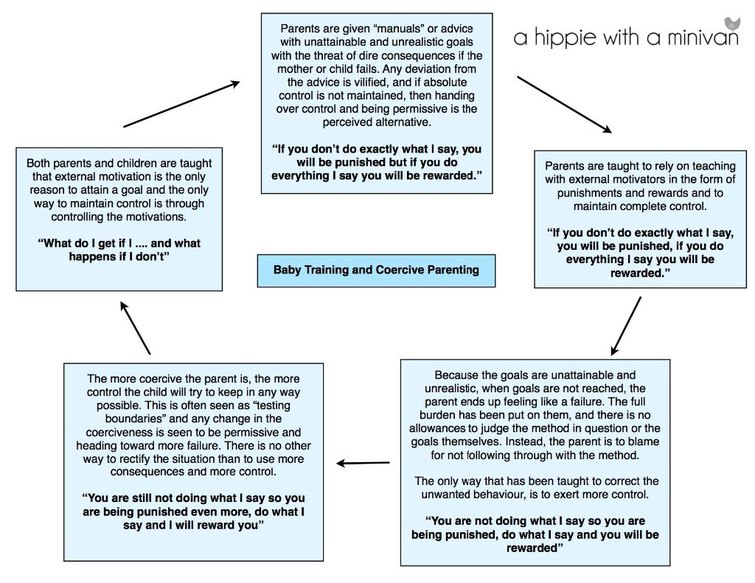 This cycle keeps coming up in parenting circles and discussions. It is the stern “reality” that if you are not “in control” then you are permissive and being controlled.

There is no middle ground and no alternatives. Everyone knows that babies and children are master manipulators and are masters of controlling so you can’t let your guard down for a second. You have to be in control. The parents that don’t use punishments or rewards are just letting their kids run wild and walk all over them and they will never to do things because internal motivation just doesn’t happen. Kids have to “learn” and the parents will have a “wake up call” down the road when they kid is doing whatever they please, jobless or even in jail because they never learned how things work “in the real world”. (I wish I was exaggerating, but I have seen all of these said in parenting threads… even just yesterday)

But I “get” it… the ideas that these parents have comes from this cycle. The whole tone of these parenting methods is by using rewards and punishments and warning that any deviations from the method will be punished. If you don’t listen to the authority and exert control, your baby won’t sleep, your toddler won’t learn to not run into the street and will get hit by a car, your child will disobey and become a delinquent and people will hate them and look down at you as the parent for failing to do the “right” thing. Following the rules of the book and the authority will in turn create “good kids”.

The parent’s behaviour is being controlled by the very ideology of punishment and reward and they are in turn is teaching the same to their children.

The problem though is that following the rules, especially when goals are actually unattainable, is that the parents and children are doomed for failure. Parents end up needing to step it up a notch to be more in control and are forced to choose between doing what they are told and doing what feels right.

I have never heard someone say that it feels right to make their baby cry itself to sleep. They say that it just needs to be done. They are taught that there is no other way, and are led to believe that these behaviours are not normal. The fact is that it is completely normal, but to admit to it or relent control is the equivalent of defeat.

The thing about this cycle is that if someone breaks it, they actually have to have a whole paradigm shift. It is a completely different way of seeing things when you start trusting in yourself and trusting that children will thrive and succeed without being controlled. It also means that we must be able and willing to accept and forgive ourselves for the choices they we may have made in the past that have had negative effects. It is easy to become defensive and say that it didn’t happen, or minimize the effects, but it is not constructive to do so.

It is time that we stop this cycle.

If there is anything that we wish to change in the child,

we should first examine it and see whether it is not something that could better be changed in ourselves.

Continue to read: Discipline and How Non-Punitive Parenting Works