I have not written in such a long time.

Not because there is nothing to say but because my posts seem to build up more and more until I don’t know what to say first and then simply ignore the whole thing. Yeah, I am like that at times. So I thought I would do an update post and go through everything…

We Shine:
An amazing unschooling conference for seasoned unschoolers that takes place in the Catskills in NY. It takes place just before school is let out, so we have the camping grounds to ourselves and we become a unschooling community.
The kids are free and the relationships are deep. There is sharing, there are hugs, there is support, there are laughs and good food and amazing company, dancing and swimming, games and walks full of contemplation, and renewed energy for a lifestyle that is little supported in everyday life.

Simply put… it is an ideal family which I am honoured to be part of.

Here are the kids all packed and ready to go…

I love my 2008 Dodge Caravan with the Swivel N’ Go Feature! 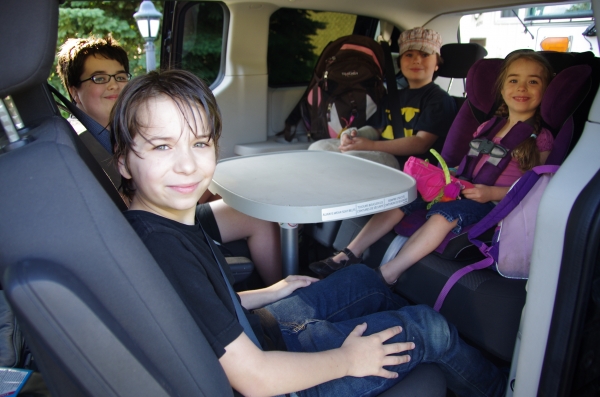 and here is the amazing shining unschooling family! 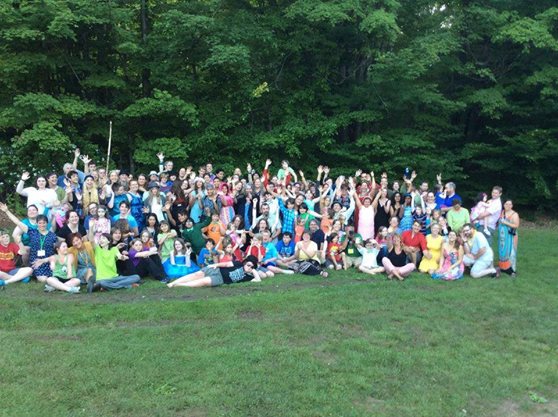 While we were at Shine I found out that my grandmother’s cancer had returned and was not becoming generalized. It was a shock but then again, we knew that it might happen. We thought we were going to lose her in June because she had a tumor that was blocking her intestine but she is a fighter and though the doctors had said that it was nearly impossible, with Chemo, the tumour shrunk enough to give her a few more month of life. She headed home in July and my mom has been taking care of her since. She has ups and downs but she is not ready to let go yet.

With the kids…
Haven’t they grown!! 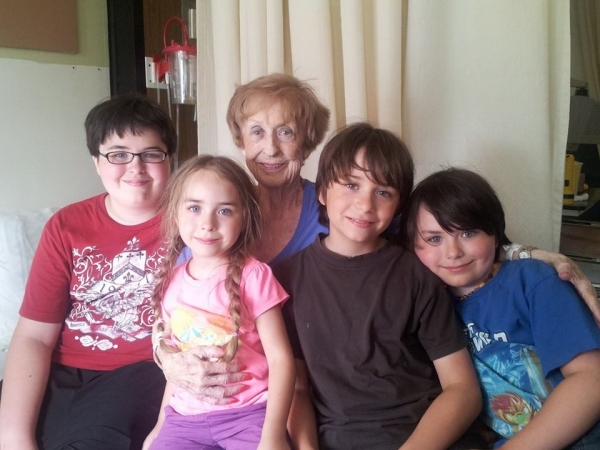 With Simon and I 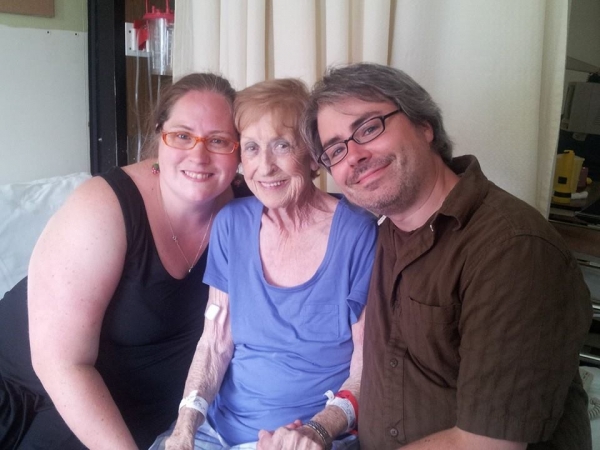 Colin and her have a special connection. He was helping her down the hall at the hospital. 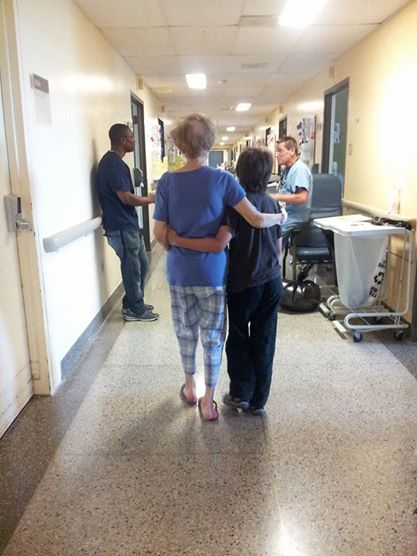 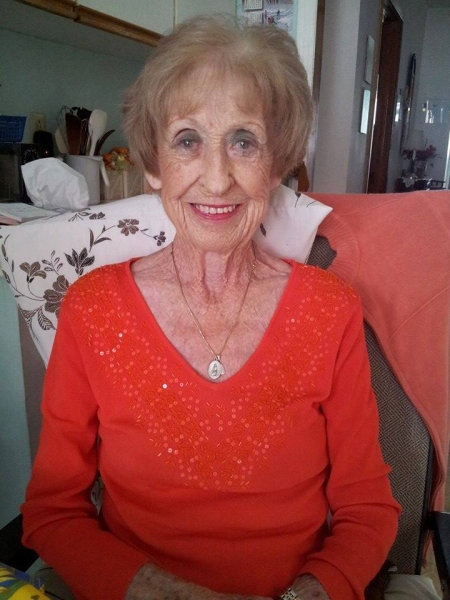 In other news… I have been needle felting and spinning, keeping up with my Etsy shop, doing craft fairs and trying to get my name out there slowly. This summer was pretty relaxed with the craft fair scene but I am going to be quite busy into the fall and Winter season. I also have a fair tomorrow that seemed to pop up unexpectedly. It is definitely not going as fast as I would want but I guess it will just take time…

As for the bus… I will make that into another post!

By melissa|June 28th, 2013|Alternative Parenting, Breastfeeding|Comments Off on 4000|
Read More

As non-punitive parents,  natural and logical consequences are a big part of the process of teaching our children.

The difference between natural/logical consequences and punishment may seem minimal to some but it has a big impact in non-punitive parenting. The problem is that both of these can be used as punishments as well as being simple teaching tools.

Logical consequences on the other hand are consequences that are manipulated by another person. To be effective and non-punitive they need to be related, respectful, reasonable. They are used in most cases to either prevent a foreseeable natural consequence or to rectify a situation. A logical consequence will often not feel like a punishment to either the adult or the child and it will in many cases be what becomes a naturally self-imposed consequence (or solution) as an adult.

So what is a non-punitive parent to do in this situation? Well, first you can explain why you would like the toys to be picked up and since you know that there is a possibility that the toys could be broken if left out, you can point that out and ask the child to find a solution on their own, or find a solution together. It could be for the kids to pick the toys up on their own. You could ask them to help you pick the toys up. They could keep the toys contained to a space so that they do not need to be picked up. You could work together to reduce the number of toys so that there will be less toys to pick up or simply not let as many toys come into the house to begin with…. and well… you get the idea… . All families are different and each situation is different and may need different solutions (without ever using punishment). These are all logical consequences, and as I said, logical consequences often become self imposed solutions later on. So a direct example of this is my husband Simon who likes to play board games which can often take hours to play. Having it on the kitchen table would mean that the kids might touch or that he will have to put it away before finishing because we need the table, so the solution he found was to put a table in the computer room so that he can have the game out for days.

Now, say you have a child that keeps on running in the street. The natural consequence, is that he will be in the street; however, if a car comes there is a possibility that they might get hit by a car. No one will risk that happening of course, so the logical consequence may be that the child must hold hands, needs to stay in the back yard, or be in a carrier, etc., or head somewhere where they cannot run into the street, etc.  Of course, it may be unpleasant for the child in the moment but it is not a punishment per say. For a young child, you would use playful parenting and distraction and other methods to get the child to move onto something else. You are not trying to make a situation unpleasant in order to teach a lesson.

(Of course, there are times when parental fear gets muddled into these types of situations and you have to differentiate between a real danger and a perceived danger…  but that is another post altogether!)

The same goes with that coat that I mentioned above. A parent has experience and wisdom that a child may not yet have. So if a parent can think ahead and know that a child may be cold later even though they are not cold now and are refusing to take a coat, then the parent should not use the child’s inexperience as an imposed punishment. You bring the coat and when or if they are cold you use that as a teachable moment (with a child of the right age of course) without making it unpleasant. You can simply say, “This is the exact reason I wanted you to bring a coat earlier. you were not cold before but when you are outside for a while/the sun goes down/it gets windy you can sometimes get a bit colder. I brought your coat for you, but maybe next time we can plan ahead together?” That is it. Teaching and learning should not be unpleasant.

Here is another example of logical consequences is something that just happened in our house. Xavier (nearly 11 and stronger then he knows at times) was upset and hit the wall, and well, he made a hole. 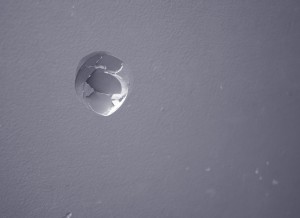 Well, the natural consequence is that there is a hole in the wall which we don’t want.

The logical consequence is that because he is responsible for putting it there, he needs to help fix it which means that he will be learning about drywall, will be taking part in patching up the hole and will be paying us back for material. This logical consequence is not about punishing. It is not about us trying to make the situation more unpleasant then it should be. It is about rectifying the mistake he made and through it he will be learning skills and might even have fun. (Well, except for giving up some of his money.) Remember, that discipline is about teaching. This is discipline.

There are many people that associate non-punitive parenting with permissive parenting but it is far from being so. It is about learning how to live through life events and being responsible for your actions without the whole thing becoming negative or unpleasant.

a an amazing Valedictorian speech…

By melissa|April 25th, 2013|Unschooling|Comments Off on Worth watching…|
Read More

The case of the missing letter…

The other day Simon went down stairs with Wilhelmina to read her a story before bed. I headed down stairs and he showed me which book he had been about to read and I immediately thought it had been a great choice. The book he had in his hand was an ABC book and Willa loves looking at the alphabet and especially loves to find “her letter” in anything she can.

But there was a problem.

Can you see it?

We searched for it in all the places it should be and it was simply not there. Wilhelmina was quite sad that her letter was nowhere to be found in a book of ABC’s.

We wondered why it wasn’t there. Maybe the author just couldn’t find a way to start something with “W”. I mean it could be possible, but who would leave out a letter in an ABC book? Especially one made for L’Acédemie Française.

I went to bed and the next day I thought about the book again and thought of something. The author, Jules Lemaitre was born in 1852.  Since there are not many, or very little words in the french language, could it be that the letter W was actually not part of the alphabet at that time? I did a few searches and guess what? that’s exactly it!!

The letter W is actually one of the newest letters and was only introduced into the Latin alphabet in the middle ages and was characterized two V’s “VV” and it was introduced to bring in the sounds of the “W” from the Germanic languages. In French, the letter started slowly making a appearance in the grammar books mid 19th century but only as an extension of the letter V. It was only in 1964, so less than 50 years ago, that it became an official letter of the French Alphabet.

So now we know why our ABC book does not include the letter W. Isn’t that somewhat cool?

For Wilhelmina’s sake, I think we will need to stick to more recent ABC books.

By the way, you can check out the book here: ABC Petits Contes de Jules Lemaître