I have heard some non-Quebec Anglophones call it “maple fudge” but I don’t like that term.. traditionally it doesn’t have any maple syrup and the texture is not fudge. It is dense and sweet and creamy but slightly granular without at all being grainy. It is simply Sucre à la Crème…  but if you had to translate it I would call it an addictive pan of creamed sugar…

For years I have been looking for the perfect recipe and have failed at many attempts. The biggest problem in that most recipes are no longer traditional. They are made in the microwave and have evaporated milk instead of cream. Other recipes don’t have the steps written out well and the results are either too hard or too soft.

There is nothing complicated about the ingredients but not being a seasoned candy maker, using a glass of water to determine is it is at a “soft ball” stage doesn’t help me in the end… maybe one day I will be there, but I am not there yet…

First in a heavy bottomed pot (large pot because it will boil up) mix together the cream and two sugars and place over medium-high heat. Stir a few times and then when you start to see it boil around the edges, place your candy thermometer on the edge careful to not touch the bottom and then don’t touch the spoon again. 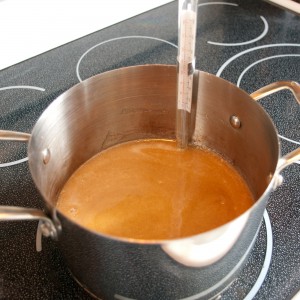 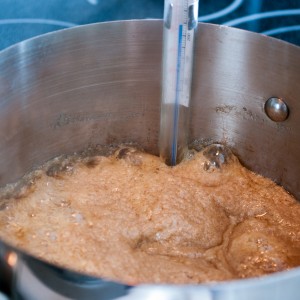 Still not touching the mixture… add the butter and vanilla… reject the impulse to stir!! 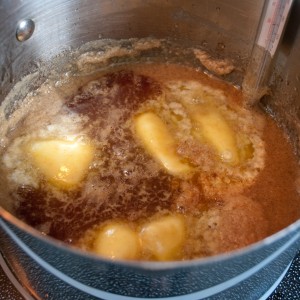 Now.. let the mixture cool until the temp hits 110F (43C)… if you let it sit it on the stove it will take about 45 min, but you can speed up by placing the pot in a sink with cold water.

While you are letting it cool, prepare a pan by buttering it and set aside. (I use a 8X8 square pan for a double batch but you can use a loaf pan for a single)

Once it hits 110F it is the crucial part… take your wooden spoon and stir, stir, stir until the mixture starts loosing its lustre (basically around the time that you feel like you will lose your arm if you keep on stirring) and then quickly pour into the prepared pan. 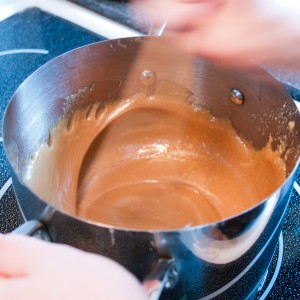 Timing is really crucial here. Don’t stir long enough it will be too soft and won’t hold together. Stir a few seconds too long it will start hardening right in the pan and will be impossible to spread out.

Smooth out the top of the Sucre à la Crème and then let cool and cut into small pieces. I hope you make it and taste a bit of the holidays here in Québec!