Update on the braided table runner…

I am loving how this table runner is coming together!

After I had bought the fabric and was putting it together I thought that I had made a mistake with the choice I made but once I brought the colours together in a different way, I knew that it would turn out pretty and it is even better than I would have imagined it would be.

The top is now finished and I have sandwiched it with the batting and the backing and “all” I need to do now is to quilt them together and then finish the edges. I have the “all” in quotations because though I know I will like it when it is finished, actually putting the needle down and figuring out how I am going to quilt it is the hard part.

There are some definite mistakes in it but I don’t think it all that bad for a first try at the design with no pattern or instructions. I also think the overall look of it can make the mistakes seem quite minimal…

In the sewing room…

Each evening I head downstairs to bed with Wilhelmina. When she doesn’t nap (which is most days now) she falls asleep within minutes. Usually I would stay in bed with her, watching a show or movie on the IPad, reading, playing a game or something like that while cuddled next to my little girl in my warm and comfortable bed. However, I really want to sew and because Willa doesn’t nap in the day and loves to “help” out in the sewing room when I am there, I haven’t been able to spend much time in the sewing room during the day. That means that once she is asleep I need to make the decision to get back out of bed and head upstairs again. Sometimes I don’t make it but when I do it is so worth it.

I have finally finished the four corners of Wilhelmina’s quilt and I have 4 more pieces to design, and make, before I can piece the quilt together. Then I need to finish it and quilt it.

There is no real plan and quite a bit of trial and error, but I have been working with this fabric “jelly roll” that I found at the new Walmart in our town. I know… it’s Walmart… but the only other store that we had before was Zellers and that has been closed for nearly a year, so not having to drive 45 min to get certain things we need has been quite nice. Anyway, I found this fabric…

and it is now becoming a table runner… (well two table runners) which at present look like this… it is a work in progress, and things have gone wrong, and what it will look like has changed in my mind quite often, but that is the fun part of making a design from scratch…

It may be a lot easier to stay in bed, but I am loving what I have to show for the work that I do when I did get up to sew.

Of course, once I am in front of my machine, I am completely in my element and content and then I have to force myself to go back to bed at one point.

Back in the sewing room…

When we decided to sell the house last february and had a few visitors come see the house, my sewing was put on the back burner. My sewing room became a storage room for things that I was wanting to sell and I thought that I would need to start packing up sooner then later, so I didn’t want to start on any new projects anyway. The longer things dragged on, the more things accumulated and the task of clearing the space and getting back into sewing was a bit depressing and overwhelming. A few weeks ago though, I finally decided that I was going to do it. One day, luckily on the “oversized items” garbage day, I decided that the old oversized TV unit that was holding my fabric quite messily was going to go. I emptied it onto the floor and I asked Simon to help me take it to the curb.

What was left in my sewing room was a total mess. I should have taken a picture but even i didn’t want to see it. That is when I emptied two of my shelves on my bookcase which prompted my post on stuff, as the shelves that I emptied was full of magazines that I was having trouble letting go of. I was able to place all of my fabric on those two shelves but was still a bit overwhelmed by the rest of the mess.

Over the next two weeks I did a little at a time and then yesterday, I finally pushed through the last bit of e mess and am now so happy of the space. Though the space was not yet done last week, just the potential of it already had my creative juices flowing, and I decided a few days ago that I was going to finish the quilt I had started making for Wilhelmina last year so that I can give it to her for either Xmas or her birthday. I can’t believe that it has been sitting there waiting for me for nearly a year and half. I started on it when Willa was just over a year old and then with her being a toddler and into everything I slowed down, and then her health issues last year and everything else, I just never went back to it…

Now that I started sewing again, it feels so good! I love being at the machine! I just go into my own little world and it is so relaxing.

I am also thanking myself for what i had already done. I might have let the sewing room get out of control but I didn’t let my things get out of order. My plan was still on the wall where I had easy access to it, all of my fabrics were together and prepared, I had pre-cut most of my fabrics and stitched together my dresden flowers so that I wouldn’t lose any of the pieces. (actually, I did that a few months ago because I didn’t want to lose any pieces if we moved) and basically, I proved to myself that I can actually be very organized.

Yesterday, I finished piecing together the squares that will be around the center… I had already done three of them but finished the 7 that were left… These are the images from last year, but they still look the same except that I have also quilted the sash between the blocks.

Today, I finished one of my dresden flowers that will be one of the four corners. The flower itself was already sewn, I just needed to cut the fabric it would be on, cut the backing, make a “sandwich” with the batting, press it, pin it, sew it, make the center and quilt it..

I have three more to go but if I can do a bit each night I could hopefully be done my major components by the end of the week. After that I need to decide how I am going to quilt it. Another thing that I did today was make a few scrap “quilt sandwiches” which I practiced my freehand quilting on. I am still not at all comfortable doing it but I do love that even though I make mistakes, with the pattern that I am practicing, you cannot see the mistakes unless you really look for them. But of course, doing a practice run and actually putting the foot down on my hard work are two very different things.
By melissa|October 21st, 2012|Crafts, My Life, Sewing|2 Comments|
Read More

When I found out that Wilhelmina was likely going to have her nephrostomy tube for a few months, my mind start to think about how to make it easier for her. At first she refused carry the bag around with her attached to her waist and would crumble down to the floor screaming and kicking if I tried. So after a few days when she started to want to walk again and we headed out for a walk around the hospital one evening, I placed her bag in my purse and adjusted it for her so it would not drag too much on the ground and she was so happy. I started to think about what I would do when we got home…

The first morning we were home, Willa and I got up bright and early and I headed into the sewing room to work on a solution. In an hour I had put together a small bag tailored exactly to her size. She loved it!

After a day or two of having the strap fall down and having to adjust it often I added an elastic waist strap that is affixed with snaps. I have to say that it now work out perfectly. The waist band keeps the bag at the right hight and keeps it from slipping or moving around and she can use the shoulder strap if she want to or can use just the waist strap…

(the waist strap is under her shirt here and besides the tube coming out from her shorts, you can’t see that she has the nephrostomy) 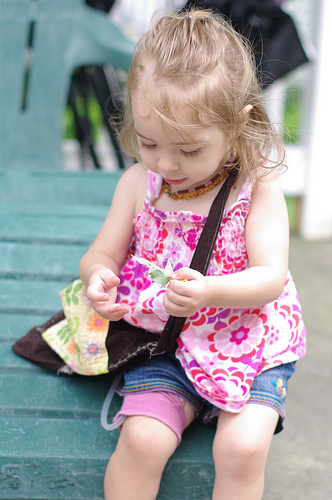 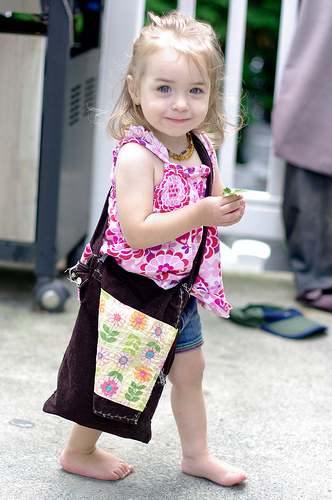 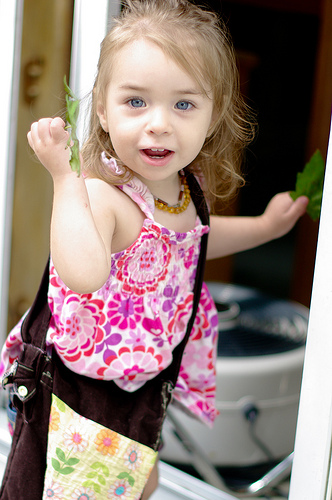 The urologist nurses and the urologist that we met with yesterday were very impressed with the setup also and because she will have it for longer than usual, it keeps things neat and tidy and there are less chances that her tube will snag on something and be pulled out, which is actually a very scary thought but a very real risk. 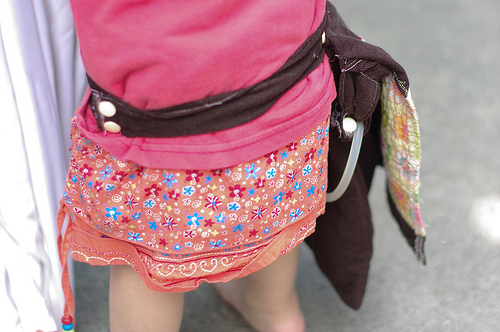 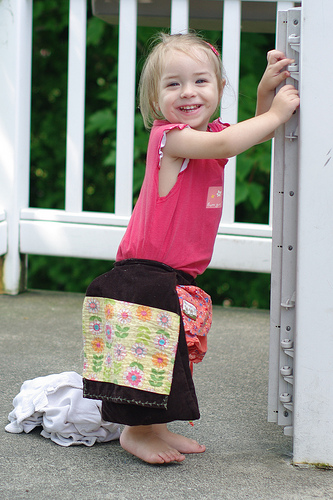 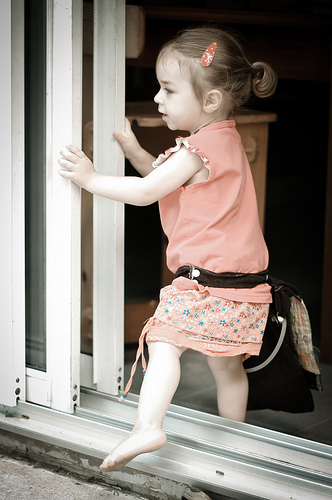 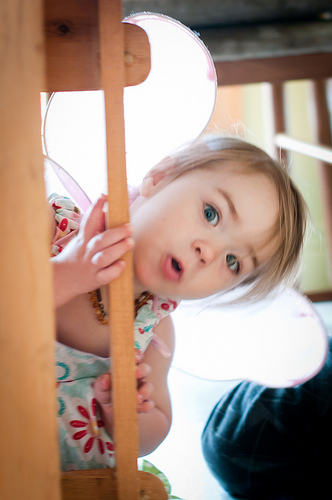 This dress basically the same pattern as the dress I made here but it has been a bit refined and simplified and the beautiful colours are really what make this dress so stunning! 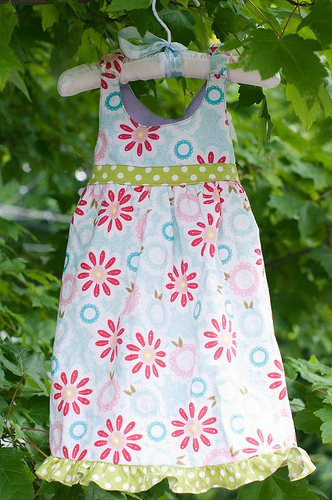 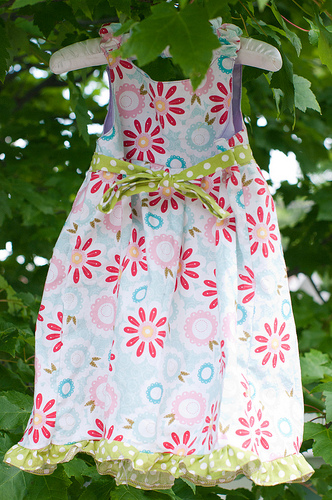 What I really love about this pattern is because of the tie in back, the bodice can be made a bit big and still fit months down the road… I love functionality of clothes that can grow with the child!! Wilhelmina can still wear her owl dress and her mushroom dress easily though the skirt is now a bit short which just makes it look more like a tunic instead of a dress…  the biggest  change that I made to this new dress besides making the skirt longer, was also to make it a bit fuller because I love the look of a full skirt… 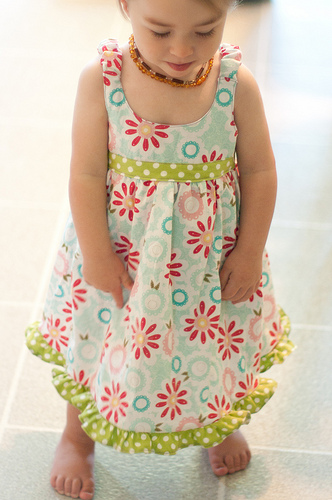 I love having my daughter wear handmade clothes…